looking for art every day 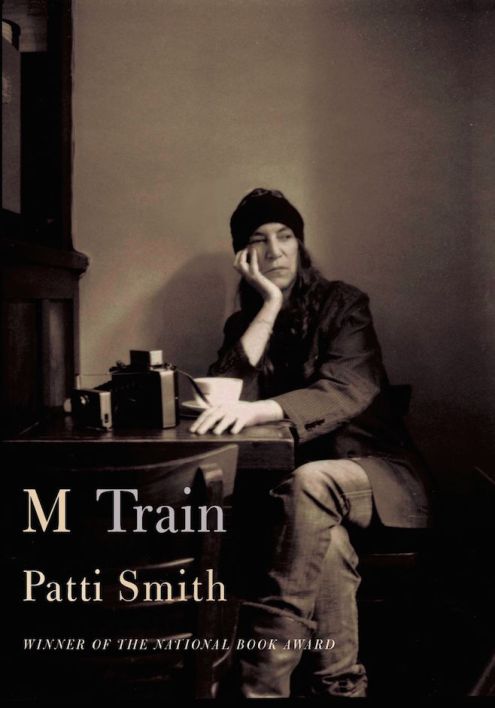 This one is about her husband.

I heard this often.

This one is about her husband.

Just Kids, Patti Smith’s previous book about artist Robert Mapplethorpe, had me at the first page. It’s romantic and scrappy: an account of friendship before fame, sickness, and death. Her prose elevates a holy sense of specifics, this hard eye for ritual–

Later I quietly straightened my things, my notebook and fountain pen. The cobalt inkwell that had been his. My Persian cup, my purple heart, a tray of baby teeth. I slowly ascended the stairs, counting them, fourteen of them, one after another.

It felt indicative of the writer and her own sense of preciousness,  nicely off-setting her hard-nosed punk rock persona.

This type of narration continues with M Train, her follow up book– but, like many second albums, progressing into the work, I find myself . . . irritated. Yes, the prose has a similar beat, but the intention behind it seems less necessary or more listless.  In other words–

Why am I reading so much about coffee and olive oil?

Cafe ‘Ino is empty save for the Mexican cook and a kid named Zak who sets me up with my usual order of brown toast, a small dish of olive oil, and black coffee.

I want to know more about Smith and her husband.

But why? Is it because of my own expectations– because I am married and want to know how she figured it out– how to be artistic AND a mother AND an individual roaming the world?

Regardless, I keep reading, deeper into her coffee ritual . . .

“In Michigan, I became a solitary drinker, as Fred never touched coffee. My mother had given me a pot that was a smaller version of hers. How many times had I watched her scoop the grounds from the red Eight O’Clock Coffee tin into the metal basket of the percolator . . .”

In the weeks to come I would sit at my corner table reading nothing but Murakami. I’d come up for air just long enough to go to the bathroom or order another coffee.

What is this book about exactly?– A string of coffee habits punctuated by a few notable memories: Frida Kahlo’s room? The Arcade Bar? The Continental Drift Club?

I continue to read, determined to figure it out.

I decided to return to Rockaway, and walked home quickly trying to avoid mounting images of Fred’s last days. I threw a few things in a sack, and then stopped back at the deli for a corn muffin to take on the train.

Not all people are created equal in death. Some are buried deeper than others– their impressions, harder to excavate without dampening the actual experience of our own heartbeat.

And with this meditation, I approach Smith’s chapter about Hurricane Sandy and what its storm provoked: a beautiful mess of what can no longer be held back.

Racing through Detroit on Mischief Morning with Fred in the back of an ambulance to the same hospital where our children were born. Returning home alone after midnight in a raging thunderstorm . . . Fred believed that if he ever entered a hospital he would never leave.

On Halloween, resilient children with raincoats over their costumes ran through the black rain-soaked streets with sacks of candy. Our little daughter slept in her costume, believing her father would see it when he came home.

I turned off the lantern and sat listening to high vocal winds and the pounding rain. The storm’s energy drew out every memory of these days, a dark autumn journey. I could feel Fred closer than ever. His rage and sorrow for being torn away.

Loss is not only isolating, but boring– each day that follows the next, tedious. Attention must be given to the small things or you will never survive. And just like that, suddenly, her previous  torpid rituals with coffee or food transmute from redundancies into placeholders– where we go to cope so we can keep living despite.

In this sense, M Train is about grief and survival more so than love and people and it’s definitely worth the time.